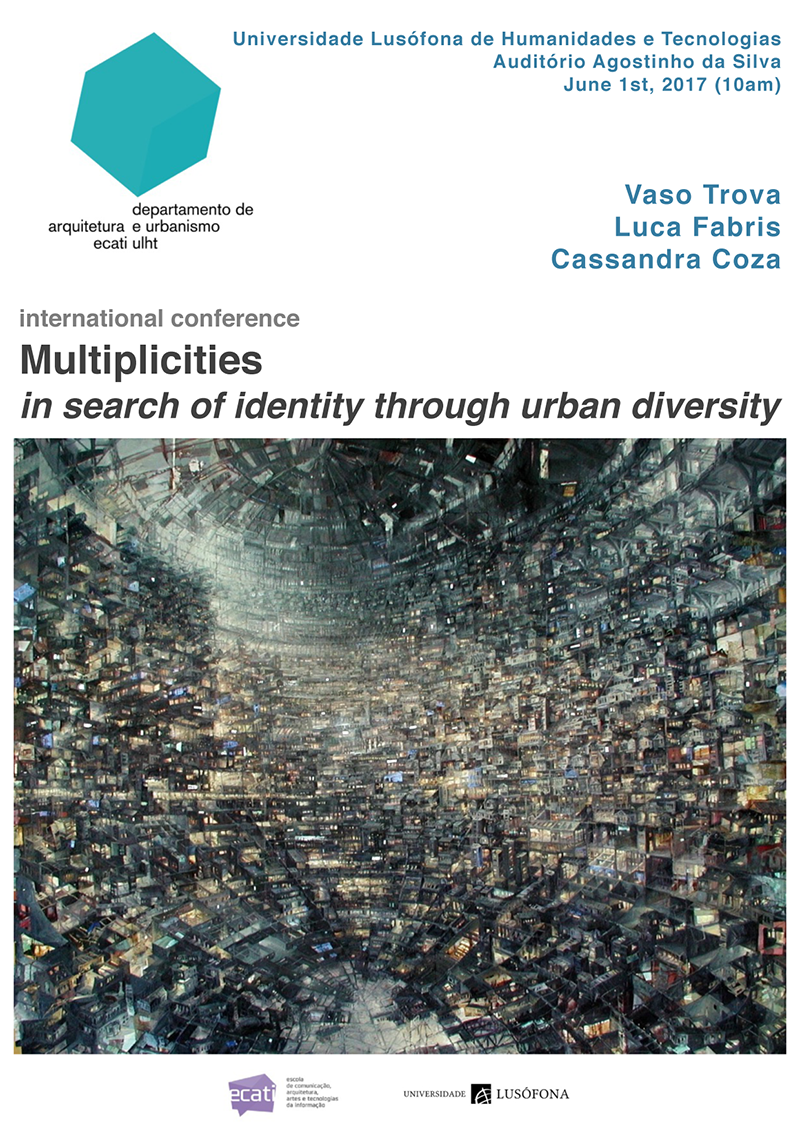 Urban transformations imply losses and gains. The phenomena of adaptation to the problems of the twenty first century are complex and sometimes radical.

What multipliCity do we want?
What kind of urban reality will be emerging in the current era of uncertainty?

According to Aldo Rossi a city’s identity is born into its memory, between real and imaginary space. Besides, the city is a human artefact on its constant becoming, beyond being a political, social and cultural fact.

However, given the current paradigm of emerging globalisation, social mobility and cultural multiplicity — a product of the movement of History, for some, or simply for others, of its end — there is a latent tendency to focus
the discourse on the city on atopic constraints, where the present is uncertain, and emergent heterotopias and distopias reveal the current Zeitgeist.

Up to a point, one can see the city as the ultimate ‘nonplace.’

Cities of the twenty-first century are plural. The political, economic and social transformations which are present in the large metropolitan areas tend to increase cultural clashes.

Paradoxically, they are a consequence of the contemporary emergence of difference and identity. In the contemporary Babylon, everything seems uncertain, fragmented and changing, diluting and recreating realities at the speed of the centripetal acceleration of time.

Urban space is consolidated by sedimentation. It is the result of accumulations and transformations occurring in long periods of time that have been processed moreslowly, or faster, in some cases. Cities occur within cities. Fragments and multiplicities. We also know that the identity of the city does not come from its longevity.

There are new cities with a more definite and constant identity than older ones which, as a result of diverse circumstances, have lost them, transforming themselves into vast metropolitan, polycentric agglomerations, or into more or less defined territories or of uncertain contours that change depending of local or global phenomena.

Cities have many lives and, like people, die, are born and reinvent themselves. All this happens, from the East to the West, but also within “our cities”, to the scale of “our neighborhood” where, as the poet says: “my street only ends where I want.”
Urban transformations imply losses and gains. The phenomena of adaptation to the problems of the twenty first century are complex and sometimes radical.

And what does it remain from the vanishing?

Which instruments allow us to define the invariants of the cities of the twenty-first century? Is urban design irrelevant, at least as it was defined in the industrial era? Which research methodologies and what scientific or pragmatic instruments can be developed to face the challenges of increasingly complex and pluralistic planning? Which new epistemologies do we identify? What risks lie behind the lack of adaptation of old European cities? What are their strengths and weaknesses? What do we learn from the emerging phenomena around the Mediterranean?

What dialogues do we want to reach between the North and the South, from the East to the West? And what consequences do these dialogues bring? What new dynamics are created between the metropolitan and inland regions? What “regionalisms” do we identify? What are we talking about when we refer to urban multiplicity, given the emerging political, economic, social and cultural challenges? What types of preservation, development and adaptation do we want for the polis, when we invoke economic, constructive and environmental sustainable policies? What multipliCity do we want?What kind of urban reality will be emerging in the current era of uncertainty?