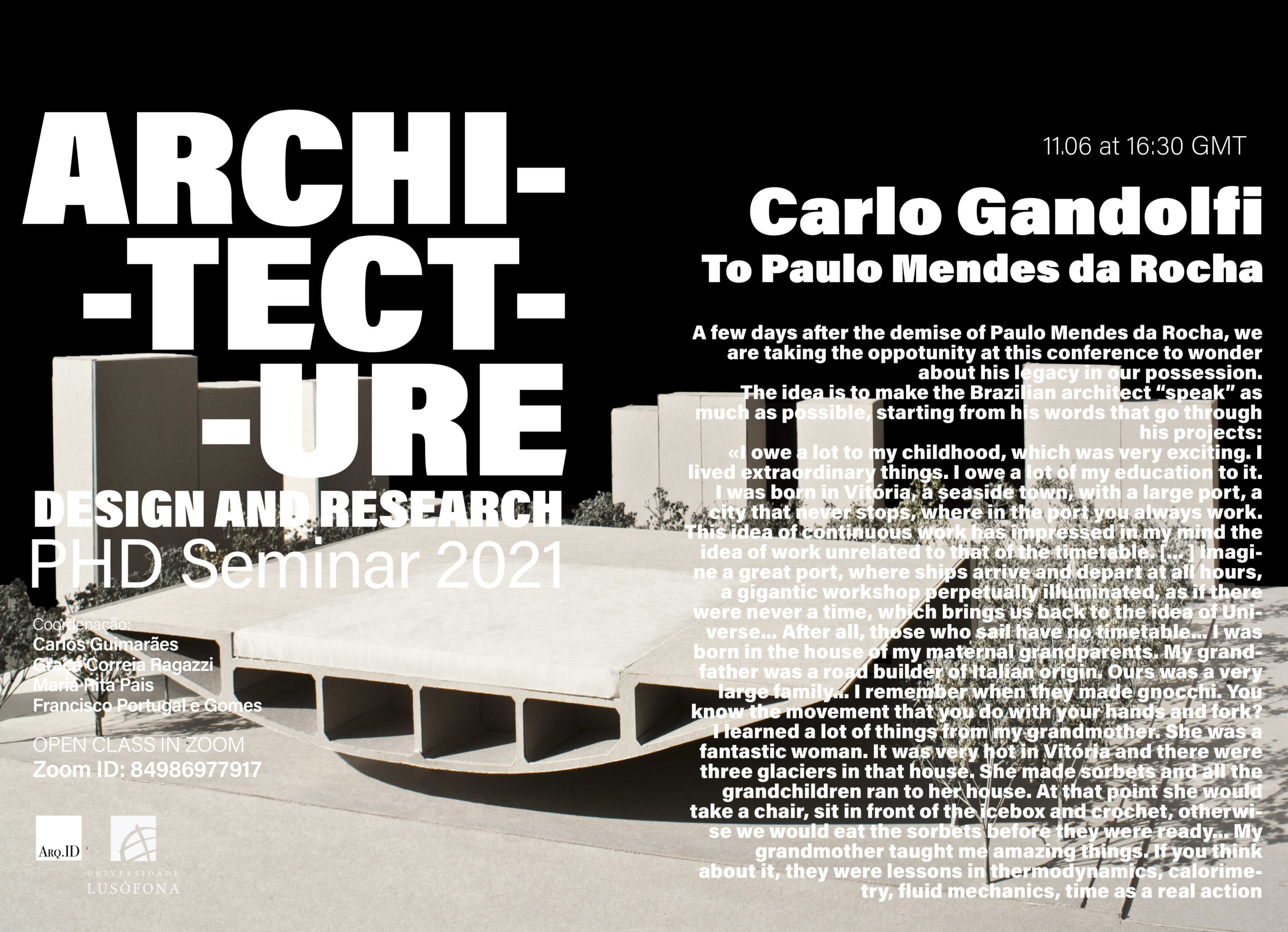 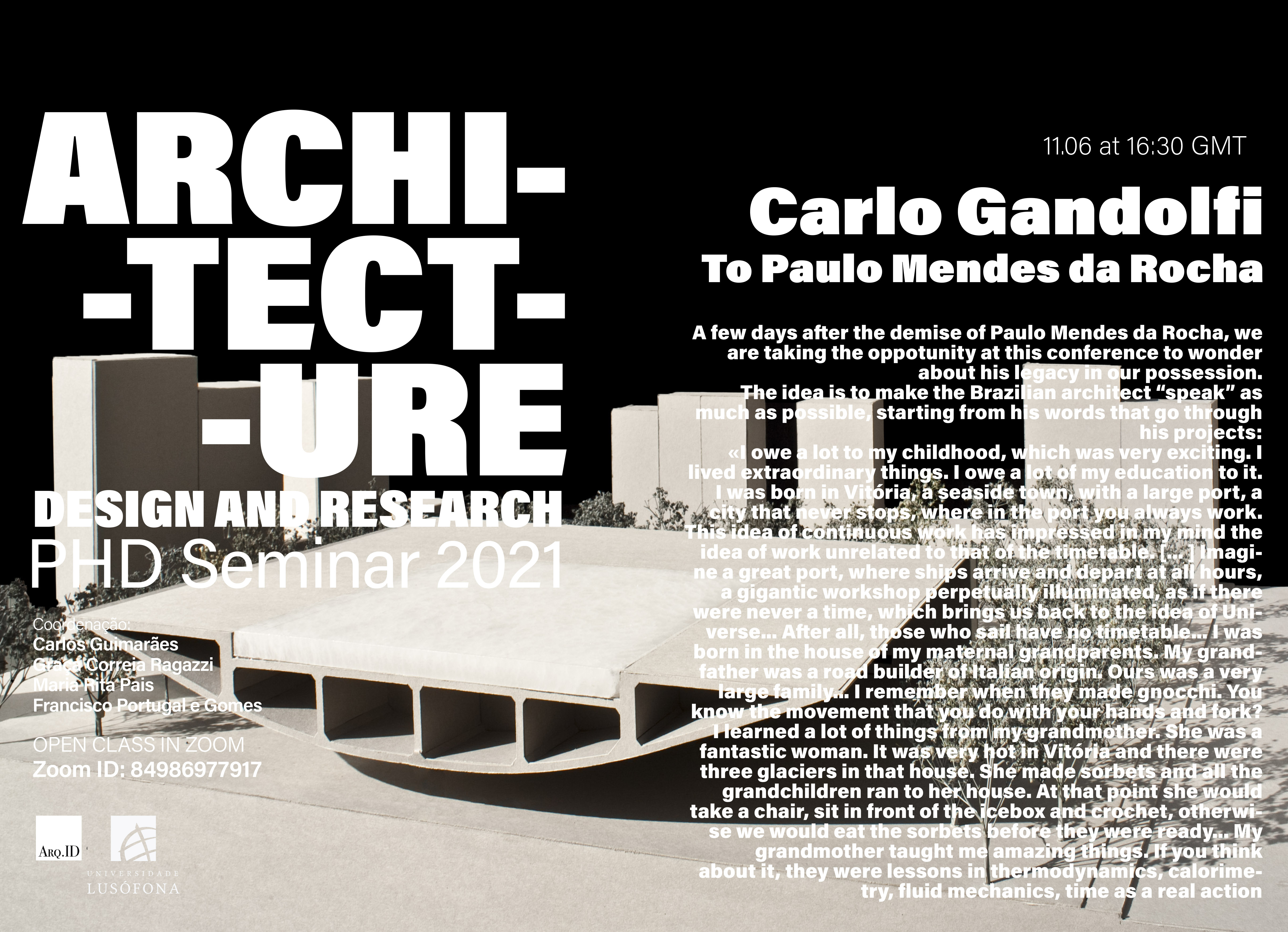 A few days after the demise of Paulo Mendes da Rocha, we are taking the oppotunity at this conference to wonder about his legacy in our possession.
The idea is to make the Brazilian architect “speak” as much as possible, starting from his words that go through his projects:
«I owe a lot to my childhood, which was very exciting. I lived extraordinary things. I owe a lot of my education to it. I was born in Vitória, a seaside town, with a large port, a city that never stops, where in the port you always work.

This idea of continuous work has impressed in my mind the idea of workunrelated to that of the timetable. [… ] Imagine a great port, where ships arrive and depart at all hours, a gigantic workshop perpetually illuminated, as if there were never a time, which brings us back to the idea of Universe… After all, those who sail have no timetable… I was born in the house of my maternal grandparents. My grandfather was a road builder of Italian origin. Ours was a very large family… I remember when they made gnocchi. You know the movement that you do with your hands and fork? I learned a lot of things from my grandmother. She was a fantastic woman. It was very hot in Vitória and there were three glaciers in that house. She made sorbets and all the grandchildren ran to her house.

At that point she would take a chair, sit in front of the icebox and crochet, otherwise we would eat the sorbets before they were ready… My grandmother taught me amazing things. If you think about it, they were lessons in thermodynamics, calorimetry, fluid mechanics, time as a real action ingredient and crochet and its code, as a measure of time: it didn’t look at the watch, it sewed for a while. My father was an engineer of Baian origin, raised in Rio de Janeiro. He was in charge of hydraulic engineering. I grew up seeing the ingenuity of things, the possibility of transforming them. I realize that all this has affected my point of view on design, on the relationship between idea and “thing”. Man can transform the beauty that already exists into a beauty desired and necessary for there to be life and build cities… there is a relationship between natural growth and human ingenuity».

Assistant Professor of Architecture and Urban Design at the University of Parma since 2013, Carlo Gandolfi is focusing his research on the relationship between tectonics and architectural figure, and in particular on the relationship between collective buildings and the urban open space in the contemporary city. His research is mainly centered on the work of Paulo Mendes da Rocha, the Brazilian architect who was awarded with the Pritzker Prize in 2006.
He is the author of internationally reviewed books including: “Matter of Space. City and architecture in Paulo Mendes da Rocha” (Accademia University Press, Torino 2018), “Il padiglione come tema and “Prove di progetto per Parma” (Maggioli, Sant’arcangelo, 2018).

He has translated, edited and written the afterword for “Motion, emotions” by Jacques Gubler and “La città per tutti” by Paulo Mendes da Rocha (nottetempo, 2021).
He has participated as a speaker and guest lecturer at international seminars and workshops.
After living and working in Venice, São Paulo and Lisbon, he has founded in 2005 in Milan, “bunker”, a research and design office on urban space, which has won various awards and whose architectural projects are published in major international magazines. With “bunker” he has created different urban design projects including the large regeneration project ‘Mare Culturale Urbano’, a cultural and artistic production center in the suburbs of Milan.