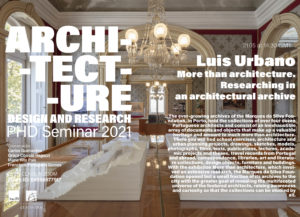 The ever-growing archives of the Marques da Silva Foundation, in Porto, hold the collections of over four dozen Portuguese architects and consist of an inexhaustible array of documents and objects that make up a valuable heritage and amount to much more than architecture. There you will find school exercises, architecture and urban planning projects, drawings, sketches, models, photographs, films, texts, publications, lectures, academic projects and theses, travel records from Portugal and abroad, correspondence, libraries, art and literature collections, design objects, furniture and buildings. With the exhibition More than architecture, which involved an extensive research, the Marques da Silva Foundation opened but a small fraction of its archives to the city with the greater goal of revealing the multifaceted universe of the featured architects, raising awareness and curiosity so that the collections can be studied by all.

Luis Urbano (1972) graduated in Architecture from the University of Coimbra. He holds a PhD in Architecture from FAUP, where he began teaching in 1999. Since then, he has been lecturing and presenting in conferences and meetings, focusing mainly on the intersections between Architecture and Cinema. On this subject, he has contributed with essays to academic journals and professional magazines. He has coordinated seminars, workshops, summer courses and the research project ‘Silent Rupture’. He has edited the books ‘Designing Light’ (2007); ‘Mundo Perfeito’ (2008), ‘Revoluções’ (2013) and ‘Circa 1963’ (2018) and has curated the exhibition ‘More than Architecture’ (2020). He is the editor of ‘JACK – Journal on Architecture and Cinema’, authored the book ‘Histórias Simples’ (2013) and directed the short films on architecture ‘Sizígia’ (2012), ‘A Casa do Lado’ (2012), ‘Como se Desenha uma Casa’ (2014) and ‘Morada’ (2019)’.