Written by mariaritapais on 15 Julho, 2021. Posted in Destaque, Eventos, Notícias 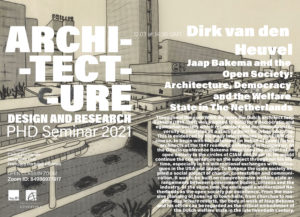 This week: 12 March 2021, 14:30 (GMT)
Dirk van den Heuvel – Jaap Bakema and the Open Society: Architecture, Democracy and the Welfare State in The Netherlands
We invite you to participate:
Zoom (class): https://videoconf-colibri.zoom.us/j/84986977917
Synopsis: