Written by mariaritapais on 23 November, 2021. Posted in Events, Featured, News 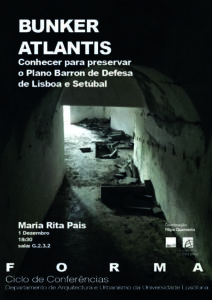 The transfer of bases in Azores to England, in 1943, changes the course of Portuguese armament and to ensure the security of the new “allied” country, the War Office establishes a joint defense plan for the continent. This “English phase” revives a 1938 project, Plan Barron (PB) for the defense of Lisbon and Setúbal, designed by the WO with the Washington Naval Treaty in mind, which Portugal had signed in 1922. The set draws a geography of surveillance and counter-bombing in the Tagus and Sado basins with eight fixed, secret, camouflaged and fortified batteries. The PB set constitutes what Gilbert Simondon calls a techno-aesthetic work, “entirely successful and beautiful” (Simondon, 1992, p.255). The project takes homage to Reyner Banham in Concrete Atlantis, as Bunker Atlantis also investigates “abandoned installations (…) barely architecture at all” (1989, p.2), but above all recalls its reference to an imaginary island in the middle of the Atlantic, from Francis Bacon “Great Atlantis”. Lisbon is the only European capital that confronts the Atlantic, a plaza in the big ocean that has always needed particular defense. So, Bunker Atlantis proposes to investigate, for the first time after its declassification (1998 to 2004), the PB, a structure with about 575,500 m2 of total area divided by eight batteries spread along the Lisbon coast. Each battery contains a set of large dimensioned bunkers to support long-range artillery pieces. Five are abandoned, one partially demolished and two have cultural use in other military areas. The variety of its forms is consistent with the diversity of the territories where they are located, from the natural park of Arrábida and Fonte da Telha to the densely populated Lisbon suburbs.