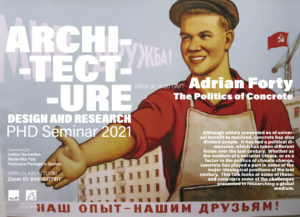 Although widely presented as of universal benefit to mankind, concrete has also divided people. It has had a political dimension, which has taken different forms over the last century. Whether as the medium of a socialist Utopia, or as a factor in the politics of climate change, concrete has played a part in some of the major ideological positions of the last century. This talk looks at some of these, and considers some of the challenges presented in researching a global medium.