Written by mariaritapais on 15 Julho, 2021. Posted in Notícias 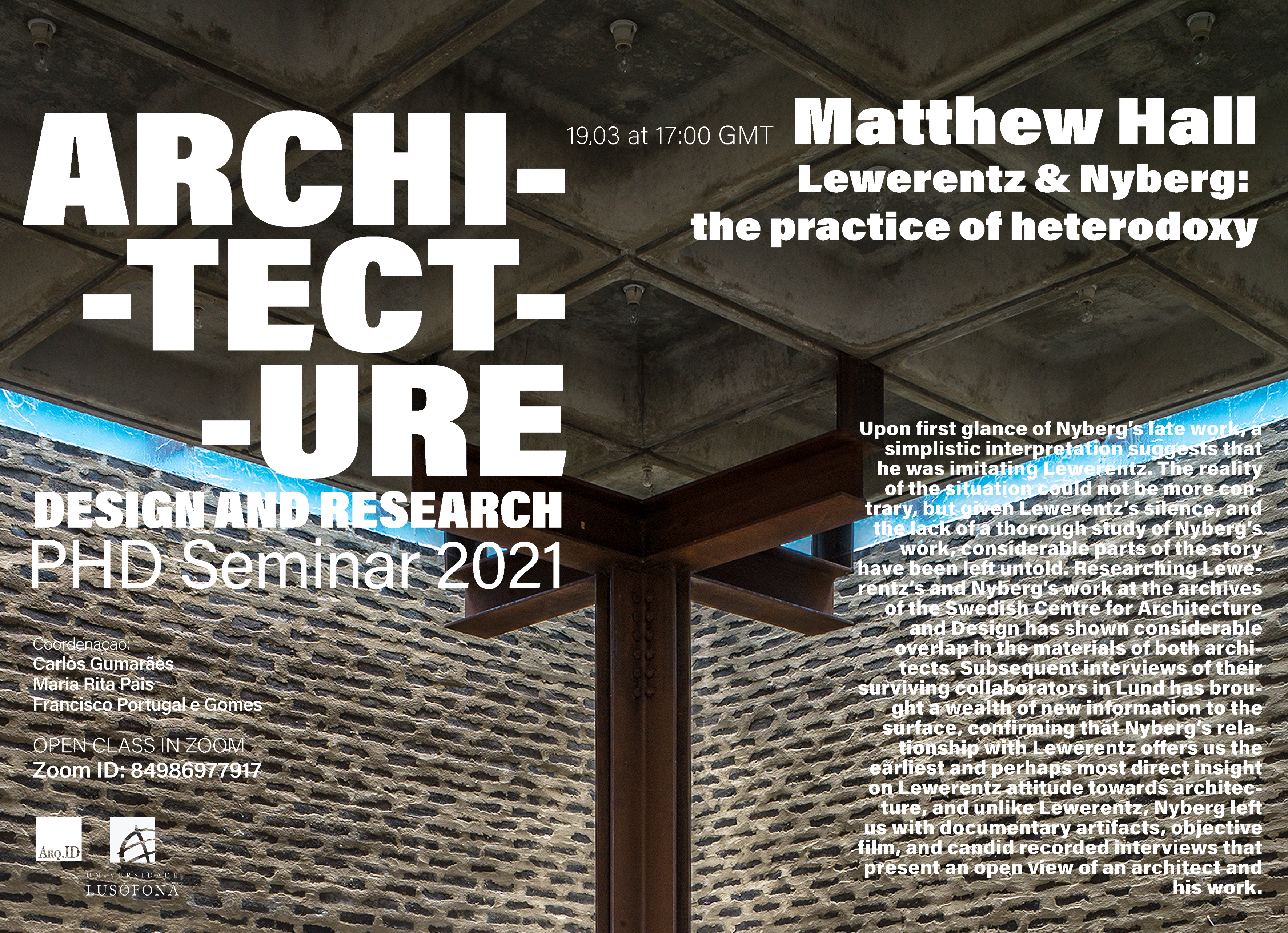 We invite you to participate:

Upon first glance of Nyberg’s late work, a simplistic interpretation suggests that he was imitating Lewerentz. The reality of the situation could not be more contrary, but given Lewerentz’s silence, and the lack of a thorough study of Nyberg’s work, considerable parts of the story have been left untold. Researching Lewerentz’s and Nyberg’s work at the archives of the Swedish Centre for Architecture and Design has shown considerable overlap in the materials of both architects. Subsequent interviews of their surviving collaborators in Lund has brought a wealth of new information to the surface, confirming that Nyberg’s relationship with Lewerentz offers us the earliest and perhaps most direct insight on Lewerentz attitude towards architecture, and unlike Lewerentz, Nyberg left us with documentary artifacts, objective film, and candid recorded interviews that present an open view of an architect and his work.

While the two architects had different backgrounds and sensibilities, they shared many a common interest in material as a communicative media, un-divorced from its historical connotations, resulting in an architecture that was neither abstraction nor symbol but built essays in extreme reality. Nyberg had his own architectural practice, but collaboration with Lewerentz would change his work dramatically. He did not follow blindly in Lewerentz’s footsteps, but rather pursued a similar interrogation of material, detailing a building’s place in culture and balancing a specific design language with unique contexts. Like Lewerentz, Nyberg was enamored with archaic forms, ruins and the primal and essential nature of concrete, masonry, metals and other basic yet essential materials and sought unorthodox tactics for solving common architectural problems, such as the meeting of window and wall, or column and roof. This desire for a ‘new way’ was not an attempt to be original, but rather the result of self-imposed challenges to create essential details for a precise context out of a pure joy for problem solving.

Matthew Hall, is an Associate professor at the Auburn University College of Architecture, Design and Construction, and director of the Scandinavian Study Abroad Program. He is a practicing architect, principal and designer at Obstructures, and senior associate at Hans¬jörg Göritz Stu¬dio GbR. His research focuses on the impact of material culture and the inherently problematic nature of design.

Current research is concentrated on post-war Scandinavian architecture, in particular Sigurd Lewerentz and Bernt Nyberg, acting as a curator and designer for the 2015 & 2016 exhibitions “Endangered Architecture: the work of Bernt Nyberg,” at the Skissernas Museum in Lund, Sweden, and “Sigurd Lewerentz: Context, Fragments & Influence” at the Klippan Arthall celebrating the fifty-year anniversary of the architect’s seminal work, St. Peter’s Church. He recently guest edited a feature issue of A+U #564 in 2018 on the work of Bernt Nyberg and is editing the upcoming publication Lewerentz Fragments (ACTAR 2021.) He writes and lectures internationally on topics of architectural history, theory and criticism.