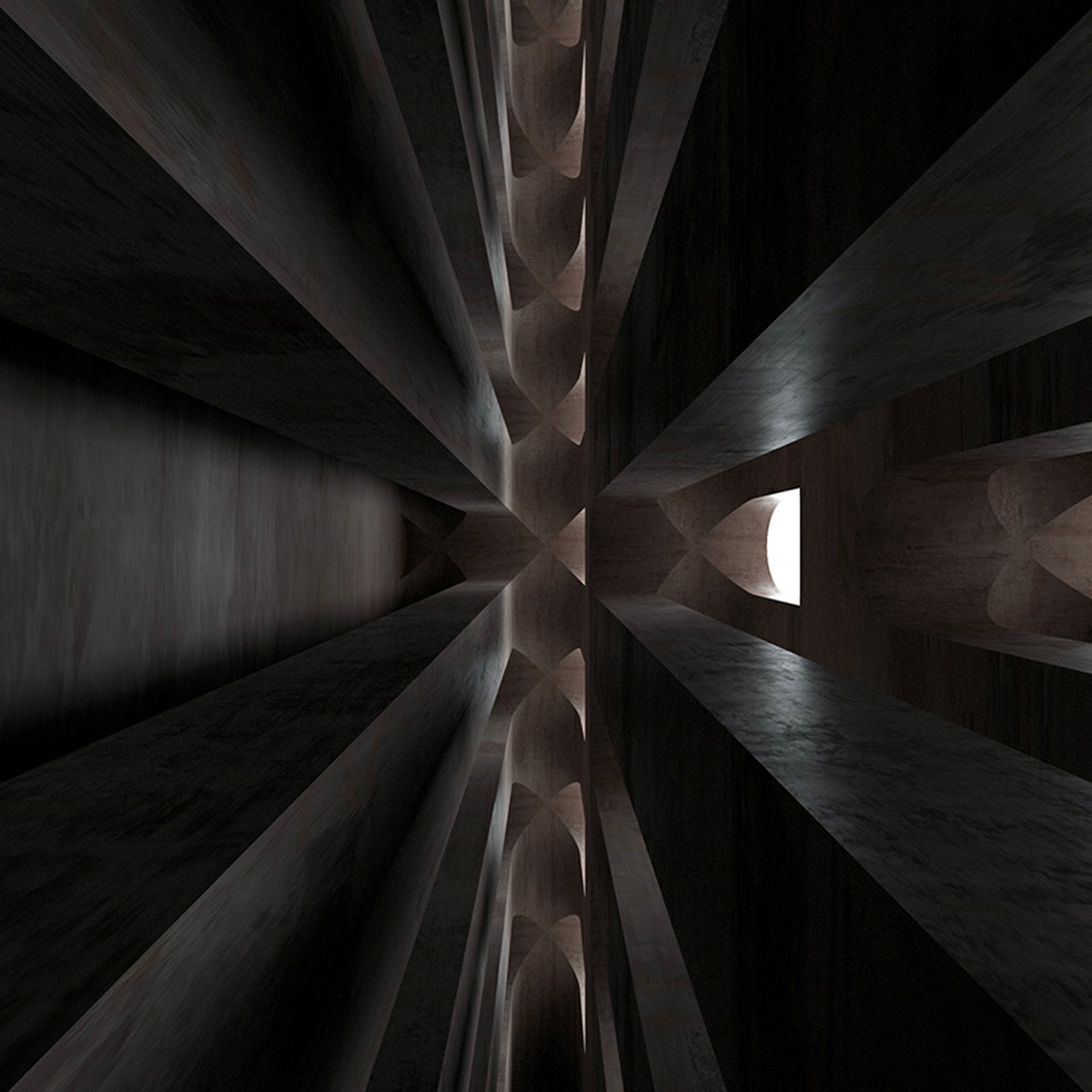 Written by Silvana Moreira on 13 April, 2018. Posted in Featured, News

Rui Silva Martins,  a student at the Integrated Master’s in Architecture, has seen his proposals Museum of Ancient Nile and Monsanto Sanctuary distinguished at the WorldArchitecture Awards/ Students.

The river, the mountains, the desert.
Seeing the Nile, his water, his stream bed. Contemplate life´s abundance, the desert and the rocks, to caress his faces. The river is life and death, the water has a primitive meaning, the Nile is a sacred Temple.
Celebrate the Nile, is to celebrate the rebirth and death. The museum is a Temple, which celebrates the sacred connection between man and the river, between the body and the soul.
As a navel (umbilicus mundi, in Greek), the museum is a centre, marks the territory and the landscape, a new centre on earth, points to the four directions, the four cardinal points. The entrances to the museum, allude to these directions, being south facing the slope, for river contemplation.
To enter, we go down a long staircase, to give entry into a tunnel, escaping the exterior world, we dive into our being. Upon arriving at the end of the walk, under ourselves and the darkness of the tunnel, we arrive to a patio, where we can contemplate the whole museum, the light and in the centre, the water. We can understand that the building is structured like an inverted pyramid.
From here we have access to stairs, which rise to the interior of the museum. In the rising sun entrance, we access the great gallery, a vaulted space with a large amplitude, where light is diffused through the holes, spreading the air and the sound. The building is to be lived through all senses. At the west entrance, we have the galleries, two vaulted spaces with permeability between them.
In the north and south entrances, we contemplate a forest of pillars, as a nature reflection, where the vertical and the light, filtered by the pillars, resembles forest atmosphere. In the middle, we see the stairs that run through the entire museum, allowing to penetrate the building space.
Above at west, the ateliers are creativity spaces. At the rising sun side, a place to see and engage in dialogue, as the Greek Agora.
Through the museum representation, we can try to image it and try to feel it…

Respecting the natural landscape, the intervention aims to integrate into the context and works as a way, appropriating the existing path that runs between the two huge rocks, which have a referential character, marking the entrance.
Here it begins to descend on the earth, alluding to the mother’s womb, it begins the journey of introspection. At the staircase, we have access to the reception and to the memory space, but at the end of the stairs we find the sanctuary, a cube with 7x7x7 meters, here the number 7 has a symbolic significance. The number 7 represents the total perfection, the awareness, intuition, spirituality and the will. The seven symbolizes completion also cyclical and renewal. We have a grand light entrance, where we are in contact with nature, this element as well as allowing the entry of light, allows the rain.
We are in harmony with the universe, allows the meditation and reflection.
When we left, we need to begin the ascent, back to the physical world and let us go to meet an overwhelming landscape. The ruins of the St. John chapel have a character of identity and memory, which must be preserved, it is a sensory experience through memory, landscape and other forms, this space becomes the place of contemplation.

Since 2006 and for over 20 Cycles, World Architecture Community organises the prestigious and acclaimed WA Awards 20+10+X. The aim of the WA Community Awards is to highlight and recognise remarkable projects that might otherwise remain unnoticed by the international public, yet have the potential to inspire exciting questions about contemporary architectural discourse.